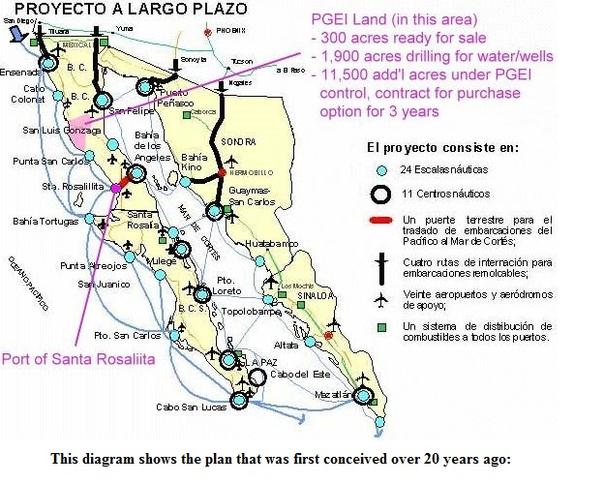 This past year, in May, the Mexican government announced the reactivation of a huge project for developing Baja California for U.S. tourists and vacationers. The first step in this project is to complete the Port of Santa Rosaliita to make the area dock-ready for cruise ships.

This is only the first stage of an enormous undertaking to create what they call the “Escalera Nautica,” (Nautical Ladder) to provide stops for tourists from California down along the Pacific Coast of the Baja Peninsula, and further development of ports and marinas all the way around the peninsula and up through the Sea of Cortez (Gulf of California).

Work began several years ago but was then halted after the U.S. market slowdown from the housing crisis in 2008/2009 that gave a dimmer outlook for near-term economic benefits (politicians and industry narrowed their view to the very short-term).

There is no question that the Mexican government is very interested in developing the Baja Peninsula in large scale. The Mexican government sees the Baja Peninsula as a huge untapped national asset that can be used to generate enormous revenue for the country – from it’s largest and closest market: U.S. companies and consumers in various markets/industries. It’s all about location, and Baja California is closer by air AND land to U.S. markets than it is to any sizeable market (in any industry) in Mexico.

Reactivated in BC Escalera Nautica, Wednesday, May 4, 2016

In an area of 240 thousand square meters, the federal government seeks to develop the port of Santa Rosalíta, which was activated in the Escalera Nautica plan promoted for more than two decades. According to what was published in the Ecological Gazette of the Ministry of Environment and Natural Resources (SEMARNAT), the National Fund for Tourism Development (Fonatur) joined the project and the Environmental Impact Statement for the completion of works and activities Nautical Scale Holy Rosalíta in BCMarina, services, warehouses and workshops. According to the Fonatur, the project is maintaining and finishing facilities nautical “scale” in Santa Rosalíta.

“This to service vessels such as drinking water, electricity, mooring, dry storage, launched, administrative support, rest areas, shopping, etc…” The document states that “the construction of a main building that will provide the necessary services … is intended”.

Additionally, it has a dry marina to be equipped with a building of workshops and warehouses for repair and/or maintenance of vessels. There will also be a marine service station (gas station), lighthouse, pier for boats, plant wastewater treatment and desalination plant. The total area where the project is located is 240 thousand 12.3785 square meters, although the phase already built an area of 31,000 square meters 937.3833 total covers. For the docks and nautical operation a maritime area of 21 thousand square meters will be available 461.35.

The project with key 02BC2016T0018 income, was published in Ecological Gazette Semarnat on April 28, 2016 (Reprinted No. DGIRA / 020/16) Background
Recently the governor, Francisco Vega de Lamadrid, announced that coordination with the federation, would boost the Puerto de Santa Rosalíta, work with the Escalera Nautica project would be reactivated.

The state president said that it is strengthening cruise tourism with an intermediate port between Ensenada and Los Cabos, Baja California Sur. The community of Santa Rosalíta, located about 580 kilometers, was integrated into the federal plan to generate connectivity to contribute to the tourist and service recovery that will also benefit the ports of the Sea of Cortez.

About two months ago, the head of the Ministry of Tourism of the Government of the Republic, said that the amount of investment needed for the consolidation of that port and were in review. The plan released in 2012, established a first stage covering the 2001-2006. He envisaged the creation of basic infrastructure to detonate the nautical activity and the creation and operation of the franchise and incorporation of existing marinas.

In addition to the construction of 12 new nautical inns and modernization of the “Land Bridge” and the start of two new nautical centers, the second stage, from 2007-2014, established the momentum of public and private investment to develop the order of 23 thousand new positions in marinas in the different resorts.
The plan plasma in the third stage of between 2014-2025, was due consolidate the project. In total, the ladder would have a network of 24 distributed nautical scales to 100 nautical miles on average.